Our book club meets on the 2nd Thursday of each month at 10 a.m. and reads a wide variety of books.

If you are interested in joining our group, just stop by the library and ask for the current selection. The books are provided on loan to us by the Potter-Tioga Library System. 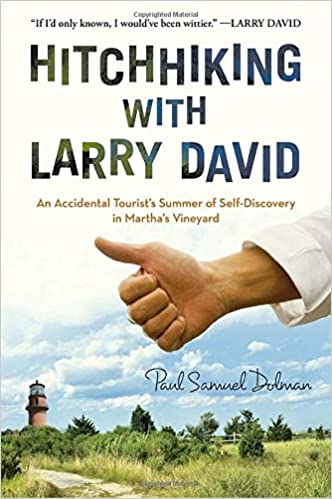 One summer day on Martha’s Vineyard Paul Samuel Dolman was hitchhiking, and none other than Larry David pulled over and asked, “You’re not a serial killer or something, are you?” The comedic writer and actor not only gave Dolman a ride but helped him find his way.

Dolman found himself on Martha’s Vineyard that summer in the wake of a painful breakup. Desperately seeking companionship, he began hitchhiking around the island and met a wide array of characters: the rich and the homeless, movie stars and common folk, and, of course, Mr. David.

Written with disarming honest humor, Hitchhiking with Larry David will leave readers simultaneously laughing and crying as they ponder the mystery and spirituality of life.

The Alchemist by Paulo Coelho

The Art of Fielding by Chad Harbach

The Art of Racing in the Rain by Garth Stein

Behind Closed Doors by B.A. Paris

The Body in the Clouds by Ashley Hay

The Boys in the Boat by Daniel James Brown

Breakfast with Buddha by Roland Merullo

The Choices We Make by Karma Brown

Crazy for the Storm by Norman Ollestad

Cutting for Stone by Abraham Verghese

David and Goliath by Malcolm Gladwell

Death at the Chateau Bremont by M.L. Longworth

The Devlin Diary by Christi Phillips

The Dinner by Herman Koch

The Dog Stars by Peter Heller

Every Last Cuckoo by Kate Maloy

The Excellent Lombards by Jane Hamilton

The Goldfinch by Donna Tartt

Heart in the Right Place by Carolyn Jourdan

Hotel on the Corner of Bitter and Sweet by Jamie Ford

I Still Dream About You by Fannie Flagg

The Immortal Life of Henrietta Lacks by Rebecca Skloot

In the Garden of Beasts by Erik Larson

The Invention of Wings by Sue Monk Kidd

The Kommandant’s Girl by Pam Jenoff

The Last Painting of Sara De Vos by Dominic Smith

Lawrence in Arabia by Scott Anderson

The Leisure Seeker by Michael Zadoorian

Life on the Color Line by Gregory Howard Williams

The Long Walk by Slavomir Rawicz

Love in the Time of Cholera by Gabriel García Márquez

Me Before You by Jojo Moyes

Murder at the Vicarage by Agatha Christie

My Life in France by Julia Child

The Night Circus by Erin Morgenstern

No One Knows by J.T. Ellison

Not Without Hope by Nick Schuyler

On Beauty by Zadie Smith

One Last Thing Before I Go by Jonathan Tropper

The Other Typist by Suzanne Rindell

The Rebellion of Jane Clark by Sally Gunning

The Red Tent by Anita Diamont

The Road to Bittersweet by Donna Everhart

Spirit of Steamboat by Craig Johnson

Take Me With You by Catherine Ryan Hyde

The Tea Girl of Hummingbird Lane by Lisa See

The Thirteenth Tale by Diane Setterfield

The Time In Between by Maria Duenas

To the End of the Land by David Grossman

Turn of Mind by Alice LaPlante

The Unlikely Pilgrimage of Harold Fry by Rachel Joyce

The Vanishing Act of Esme Lennox by Maggie O’Farrell

The Violets of March by Sarah Jio

The Virgin Blue by Tracy Chevalier

Water for Elephants by Sara Gruen

The White Garden by Stephanie Barron

The White Tiger by Aravind Adiga

The Winter Ghosts by Kate Mosse

The Year of the Hare by Arto Paasilinna

The Zookeeper’s Wife by Diane Ackerman